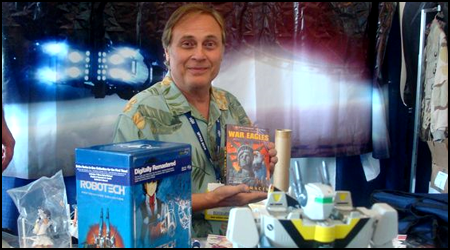 Very sad news for Robotech fans. The man who's groundbreaking work helped introduce anime to the masses in North America has passed away on Saturday April 17, 2010 due to a heart attack. Jerry Beck, animation historian first reported on his blog on Sunday. Our thoughts and deepest sympathies go out to his family and friends! May you rest in peace.

The service will be open to the public, but we ask well wishers to be mindful of Carl's friends and family. In lieu of flowers, we request that donations to assist with memorial expenses be made out to Svea Macek and sent to the following address:

Very sad news for Robotech fans. The man who's groundbreaking work helped introduce anime to the masses in North America has passed away on Saturday April 17, 2010 due to a heart attack. Jerry Beck, animation historian first reported on his blog on Sunday. Our thoughts and deepest sympathies go out to his family and friends! May you rest in peace.

Mutual friend Bob Cabeen has just informed me of the passing of my former business partner Carl Macek. Carl died of a heart attack on Saturday.

Among his many accomplishments Carl created Robotech, co-founded Spumco with John K. and co-founded Streamline Pictures (Akira, Fist of the North Star, Laputa, etc.) with me.

Carl began his career doing grassroots promotional work on sci-fi films such as Star Wars and Alien, and worked for numerous industry icons including Dino Di Laurentiis and Ivan Reitman. He wrote the book The Art of Heavy Metal (Animation for the Eighties) in 1981. In 1984, Macek began his long association with Japanese animation. He worked with Harmony Gold, U.S.A. to develop the groundbreaking anime series ROBOTECH that has been credited with igniting the anime movement in the US. After his stint at Harmony Gold, Macek moved on to work for D.I.C. and Bill Kroyer’s studio.

In 1988, Macek divided his time between forming Spumco with John K. and partnering with me to create Streamline Pictures. In 1990, after helping sell Ren & Stimpy to Nickelodeon, Macek parted with Spumco to develop Streamline Pictures full time. Streamline imported and dubbed anime features for US movie theaters, for television showings and home video for over a decade. One of his most enduring projects during this period was producing the original English-language dub of the Miyazaki classic My Neighbor Totoro.

In the late 1990’s, Macek returned to original animation production and was instrumental in developing several projects (Heavy Metal 2000 and Lady Death). Most recently, he has adapted, produced and directed English–language versions of Tomino’s classic 49-episode fantasy Aura Battler Dunbine. He also adapted numerous Japanese anime for the North American market including Naruto and Bleach.

Carl had been working on a slate of original projects as well, including War Eagles, a novel and screenplay inspired by Merian C. Cooper’s unproduced film treatment. Some of his recent science fiction short stories can be read at storyleap.com.

Carl had his critics. But one thing is certain: the popularity of anime in the North America would not be where it is today without Macek’s groundbreaking work on Robotech and his efforts on behalf of Streamline Pictures.

The photo above (with Ed Asner) was taken recently on the set of Audrey, where his wife, Svea, was costume supervisor. Below is a video of Carl at a recent anime convention (January 2010) in San Francisco discussing what he’s been up to recently.

Jonathan L. Switzer: Farewell to the man responsible for creating, out of three (mostly) unrelated robot anime, my most favorite thing ever -- for which I thank you, sir, from the bottom of my heart. You will be missed, but we will always remember. Rest in peace.

Nenad Petrovic: This is a sad day . Rest in Peace Carl Macek. And thank you for giving Robotech to us.... And Personaly thank you for all the kind words you gave to me , and UEG Productions. It was a great honor. A Great Man Passed away. You will be remembered. Nenad.

John Hall: Without Carl, there would have been no Robotech and no anime fandom. RIP.

Tommy Yune: My good friend Carl Macek just passed away this weekend. This is especially untimely as I felt that he was about to do some of his best work.

Robotech.com Tribute to Carl Macek
Discuss this article in the forums

Thanks to GUbaba for the link