Anime Expo 2009 comes to a close today and at the Robotech Panel there were some announcements that Robotech fans will definitely enjoy. 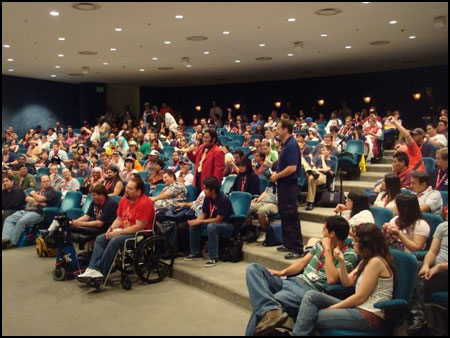 Anime Expo 2009 comes to a close today and at the Robotech Panel there were some announcements that Robotech fans will definitely enjoy.New sourcebooks from Palladium: Robotech®: UEEF Marines Sourcebook and Robotech®: New Generation™ Sourcebook. An exclusive Comic Con 2009 VF-1S Stealth Veritech. 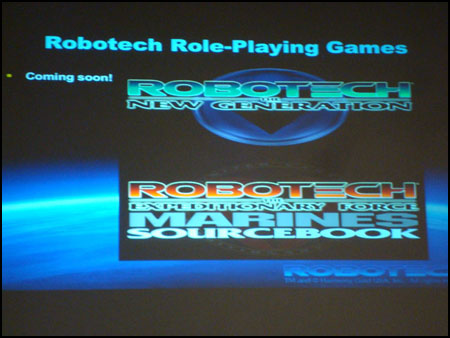 New Generation™ presents the era of the Third Robotech War on Earth starting with the resistance fighters' struggle to rid their world of the Invid invaders. An epic setting in which mecha from all three Robotech® eras can be used.
● New and variant Mecha, vehicles and weapons.
● Guidelines for using mecha from ALL three Robotech Wars.
● Resistance Fighter O.C.C.s & Organization creation rules.
● Invid, their society, plans, weapons & mecha.
● Invid Genesis Pits and the monsters within.
● New Generation characters described and with stats.
● Adventures, adventure tables and world settings.
● Written by Kevin Siembieda. Manga size (5x7½ inches).
● $16.95 – 220+ pages – Cat. No. 554 – ISBN 157457-178-8.
● Scheduled for a Fall, 2009, release. 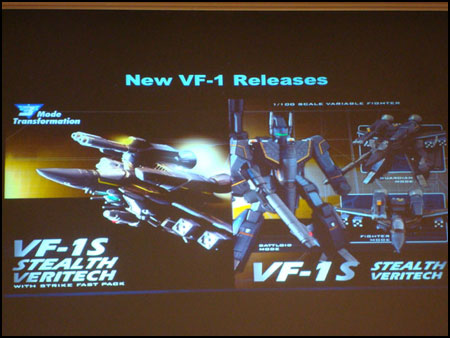 It is official, Toynami will sell a limited edition "Stealth" transformable VF-1S version at the San Diego Comic Con International 2009. This thing better not fall apart.

MEMO's Notes from the con in CAPS of course!

AND GOING FROM MEMORY

1.NEW SOURCEBOOK RPG BY PALLEDIUM CALLED
MARINES. TAKES TIME AND COULD EXPLAIN MUCH ON THE SENTINALS TIMELINE

5.SHADOW RISING AND RLAM IN THE WORKS

7.ALL RIGHTS BEING PULLED LIKE THAT FROM TAKE 2 (THEY DID BATTLE CRY) AND MIGHT BE SELLING TO WB. WICH INCLUDES OTHER LICENSES OUT THERE BUT NOT IN DEPTH OF WHAT THEY WERE.

8.25TH ANIVERSARY WILL BE ROLLING OUT WITH MANNY CONS AROUND U.S.A. AND MAYBE PARTS OF THE WORLD.


SO FAR WHAT I REMEMBER. HAVE NOT CHECKED TAPE.

Now that the official article is out, announcements from Tommy Yune:

Due to the overwhelming success of Robotech: The Shadow Chronicles Role Playing Game, The Macross Saga and Robotech: The Masters sourcebooks, Palladium Books will release two new supplemental RPG books covering the New Generation and The Sentinels era called Robotech: Expeditionary Force – Marines due out later in the year.

The re-release of Maia Sterling's MPC Shadow Fighter will be produced from the same factory as the Beta Fighter and released later this year!

Toynami is working on the Shadow Beta to satisfy the continuing demand for the Beta Fighter and has also sculpted a Syncro Cannon attachment for a possible future release.

European distributors TF1 and Divisia have acquired DVD rights of the award-winning feature Robotech: The Shadow Chronicles for release in France and Spain, respectively.