ROBOTECH: Prelude to the Shadow Chronicles

For those of you who didn't happen to catch the first run of Robotech: Prelude to the Shadow Chronicles comics, you can now as issues #1-5 will be available in a 128 page volume with extras at the end of May.
Discuss this article in the forums 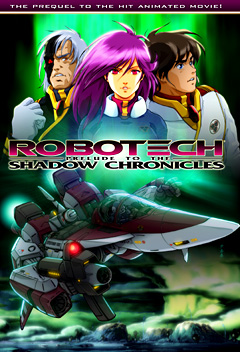 Coming at the end of May! The legendary saga continues in this prequel to the award-winning animated film Robotech: The Shadow Chronicles!

The miraculous arrival of Robotechnology brought grave devastation and interplanetary war to Earth. An Expeditionary Force under the command of Admiral Rick Hunter departed to the stars in search of the homeworld of the Robotech Masters. However, its discovery would spark an interstellar conflict that would last decades. Despite an uneasy alliance forged with alien forces, the enigmatic Invid Regent remains an obstacle to peace. However, a secret pact with an enemy within the ranks threatens to start a new war over the mysterious new science of Shadow Technology...one that could destroy the Expeditionary Force and the human race!

Featuring the triumphant return of longtime Robotech: The Sentinels comic creators Jason and John Waltrip along with beautiful art by Omar Dogan and newly added material, the prelude to "The Shadow Chronicles" has begun!