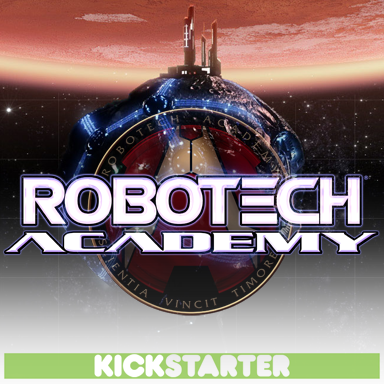 “We’re thrilled to finally be able to tell the world about Robotech Academy,” said Tommy Yune, President of Animation, Harmony Gold. “Over the last few years, Harmony Gold has been working hard to answer fan demand for a new Robotech project. The next step involves fans, who will be instrumental in supporting a crowdfunded Robotech project and making series creator Carl Macek’s original vision for Robotech Academy a reality.”

The idea for Robotech Academy springs from the mind of series creator Carl Macek, who developed the concept before his death in 2010. Harmony Gold has assembled a team of series experts, ranging from writer Ford Riley, who penned Robotech: The Shadow Chronicles; and producer Cesar Turturro of Creavision Studios, the group behind the Robotech: Valkyrie Project fan film. Following in the footsteps of the wildly successful Veronica Mars movie project, the Robotech Academy Kickstarter marks the third time that a television series has utilized Kickstarter to raise funding and build up awareness and excitement among fans and new viewers.

The Robotech Academy Kickstarter offers potential backers a variety of unique incentives for becoming part of the project. At the early bird price of $70, backers will receive the Robotech Academy Blu-Ray, DVD and digital copy, their names in the official electronic program guide and shooting script. Depending on the pledge level, Kickstarter backers will also have rare opportunities to get involved with the development process at an early stage; high level backers can even be immortalized on screen as a background character that appears in Robotech Academy. To find out more about the full list of backer rewards and the vision behind Robotech Academy, please visit www.robotechacademy.com