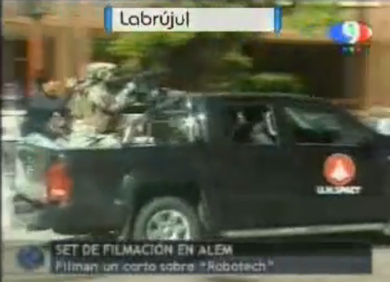 "Soldiers with almost futuristic weapons and uniforms. Vehicles in plain sight of Alem Avenue with open doors spread out in chaotic positions. What's happening in Bahia Blanca? A short is being filmed that in a short time will surely be watched all over the world with the great quality in the classic stylings of local producer Cesar Turturro." Brace yourselves Robotech fans as Cesar Turturro produces a Robotech live action short based on events that transpired in Latin America during the first Robotech chapter.

Reporter: "Soldiers with almost futuristic weapons and uniforms. Vehicles in plain sight of Alem Avenue with open doors spread out in chaotic positions. What's happening in Bahia Blanca? A short is being filmed that in a short time will surely be watched all over the world with the great quality in the classic stylings of local producer Cesar Turturro." 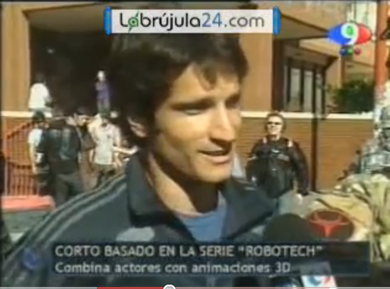 Turturro mentions that he contacted the creators of Robotech in North America to ask permission to use the Robotech name and the Veritech robot. While he does not mention if this is Harmony Gold or WB (the current Robotech rights holder) he did say he has been given the green light to continue with his project. With that said it will be interesting to see the alien attack from the point of view of another country, speficially Latin America.

The reporter asks jokingly if Bahia Blanca will be "transformed" to which Turturro replies, "we're going to destroy it [Bahia Blanca] a little, there will be complications. But in general its a global attack so its no problem."

Thanks to The Protoculture Time's JT for posting the story first!


Just happened to google Robotech news and was pleasantly surprised to see this fan initiative.

I translated the article from Spanish as best as I could.

Alem Avenure cut off to film a short feature on Robotech

"This morning the first block of Alem Avenuewas was cut off for three hours , where they filmed part of a locally produced short film based on the Japanese cartoon series Robotech .

"It is a fully independent short using our own resources, on this 80's cartoon. It's based on the first chapter, and what happened in Latin America," said the producer of the film, Cesar Turturro.

"We just ended up filming one of the most important scenes is the deployment of soldiers and extras upon seeing the 'machine' on Avenida Alem. It's exciting," said an actor dressed in a camouflage suit.

Turturro said that postproduction of the short take about five months because it will have special effects and computer animated characters.

At that stage what will be added digitally will be "a very ugly robot, alien, about 18 meters high and a robot Veritech built in Argentina, piloted by an Argentine pilot who practically steals it to come to defend the bahienses ", he said.

Turturro is also director of the film 1982: We were there about the performance of Naval Aviation and Air Force in the war with Britain over the Falkland Islands and it also combines real actors and scenes with characters and computer-animated environments. (Canal 9 y lanueva.com) (Channel 9 and lanueva.com)

We await impatiently for the trailer and more importantly the finalized product. According to Turturro the time frame for the live action short is four to five months. Thank goodness for the fandom always keeping Robotech alive!